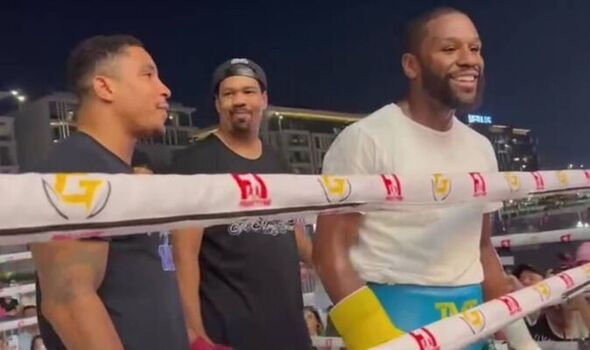 Floyd Mayweather called out Anthony Taylor for a sparring session just days before he takes to the ring to face YouTube star Deji Olatunji. Mayweather will face the social media sensation, who has fought four times and won just once, on Saturday in Dubai.

Mayweather may have retired for good in 2017, but he hasn’t strayed too far away from the squared circle. Saturday’s exhibition fight will be his fifth since he boxed Conor McGregor in his final professional bout. And it’s pretty clear that Mayweather, who retired with a perfect undefeated record, isn’t taking Deji too seriously. At the open workout for the fight, he challenged kickboxer Taylor to a sparring session in front of the media.

‘Money’ Mayweather said at the workout: “You got your boxing stuff? Let’s box then,” but his request was unsuccessful, as Taylor got into the ring, sized up Mayweather, before backing out by saying he didn’t want to risk injury before his fight on Saturday night.

The challenge came after Taylor used the press conference earlier in the week to tout a fight between himself and Mayweather. 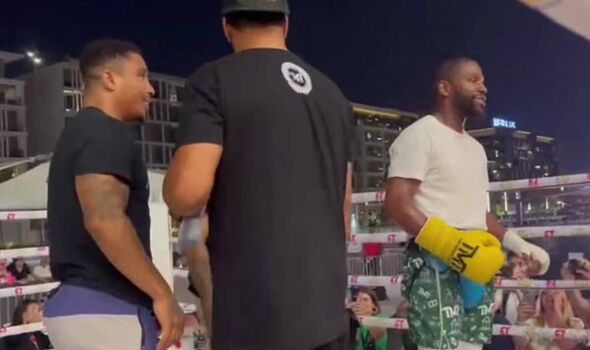 He shouted: “I think what we really want to see is ‘Pretty Boy’ Anthony Taylor vs. ‘Money’ Floyd Mayweather. Now that’s a fight. “I’m the most qualified fighter to be fighting Floyd Mayweather in exhibition. I’ve fought on Showtime, some of the biggest fights y’all ever seen on pay-per-view. I deserve to fight Floyd.”

Readmore : No. 13 Florida State to take on Oklahoma in Cheez-It Bowl

Taylor may have talked a big game at the press conference, but failed to back up his words when given the chance. After getting into the ring but refusing to fight, Taylor insisted he wanted to focus on Saturday instead.

The former kickboxer, who lost to Tommy Fury in his second fight, will face former Love Islander Jack Fincham. The reality tv star believes he’ll be no pushover, however, as he expressed he feels he’s not just another influencer boxer.

“The way boxing is going at the minute, you’ve got the influencer boxing and YouTube boxing,” he explained. “I would say that I fit in both of the categories because I’ve got a pro licence, I’ve done it since I was a kid. I’ve got experience in the ring already and it’s not going to look s***, if I’m honest. You can say ‘he knows what he’s doing’. You’re watching someone who knows how to box.”