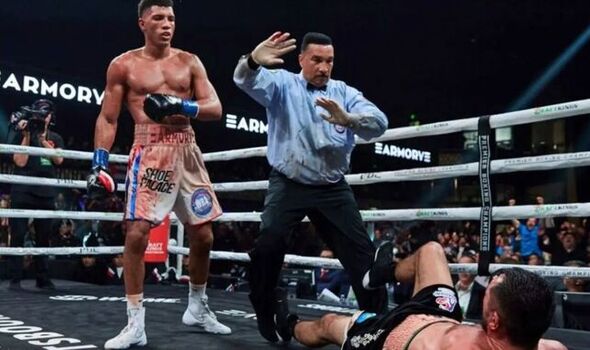 David Morell knocked out Aidos Yerbossynuly in the twelfth round (Image: Showtime Boxing)

Aidos Yerbossynuly was placed in a medically-induced coma following his knockout loss to David Morrell on Saturday night at the Minneapolis Armory. The Kazakh super-middleweight was knocked out in the twelfth round of the WBA (regular) title fight.

Morrell floored Yerbossynuly twice in the final round before referee Tony Weeks waved off the contest. He was then taken to the hospital afterward where he was placed into a medically-induced coma in order for doctors to operate on a brain bleed.

A statement from the Premier Boxing Champions, who hosted the card, read: “Representatives of TGB Promotions and PBC are on the ground in Minneapolis with Aidos’ team and we are monitoring the situation closely. Out of respect for he and his family’s privacy, we can’t share any details but we ask the boxing community to keep him in your thoughts and prayers.”

The fight was an extremely one-sided affair. At the time of the stoppage, two judges had Yerbossynuly losing every round, while the other had him down 108-101.

delivers another stellar KO to his resume by defeating Aidos Yerbossynuly by RD12 KO!

After stopping his opponent, a clearly concerned Morrell opted for a muted celebration and helped his fallen foe to his stall. Yerbossynuly’s assistant trainer Emanuel Savoy admitted that he was close to throwing in the towel in the tenth round but that Yerbossynuly and head trainer Kanat Orakbaev wanted him to continue.

“I actually had the towel in my hand,” Savoy said. “Aidos wanted to continue. His head coach (Kanat Orakbaev) wanted him to continue. He evaluated Aidos and said nothing was wrong with him,” he told .

Yerbossynuly had not fought since September 2021, when he picked up a 10th-round knockout win over Lennox Allen. He falls to 16-1 in the paid ranks with the first loss of his professional career. Morrell meanwhile, climbs to 8-0 with 7 stoppages.