Crowds gathered across Waterloo region and Guelph Friday to pay their respects to those who have fought and died for Canada.

In Kitchener, the morning started with a parade led by a handful of veterans, followed by local dignitaries, RCMP and Waterloo regional police officers.

You are reading: Thousands mark Remembrance Day across Waterloo region and Guelph

The march made its way to the cenotaph on Duke Street where hundreds of people showed up to remember the fallen.

Local veteran, retired Colonel Patrick Dennis, said Friday was about showing respect for those who fought for our country. He’s the third generation of his family to serve in the Canadian military. 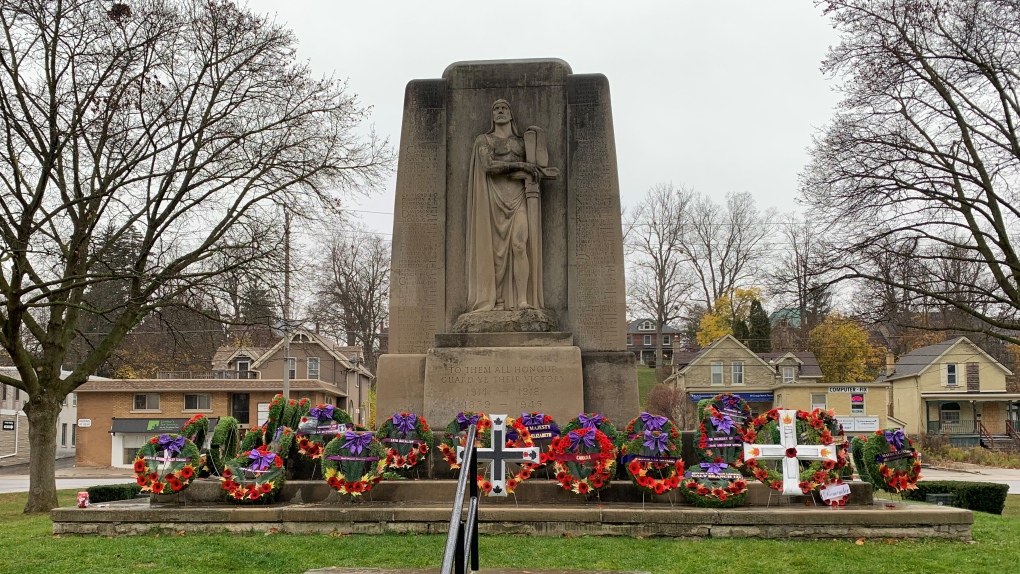 Wreaths cover the base of the Galt Cenotaph in Cambridge on Nov. 11, 2022. (Stephanie VIllella/CTV News)

In Galt, hundreds gathered at the cenotaph at Queen’s Square to pay tribute to those who dedicated their lives to their country.

The ceremony started with a march that ended at the cenotaph.

It was followed by prayers and the laying of wreaths.

Many in attendance on Friday had family members who served, some who paid the ultimate price.

Woodfield’s nephew was killed in Afghanistan in 2005.

“His name’s on the list over there. We place a wreath every year and make sure we remember.”

Another Cambridge resident, Carolyn Parker, said her parents met while they were both serving in the Second World War in Britain.

“It means a great deal to me,” she said.

“This will be the first Remembrance Day since my father passed away,” Nie said. “He was 96. He served during the Second World War in the navy.”

For one father and son, fighting for their country runs in the family.

Richard Young, now retired, served for 35 years with U.N. operations in Israel and Bosnia. He said he enlisted because his grandfather was a soldier.

His two sons followed the tradition and also pursued a career in the military. 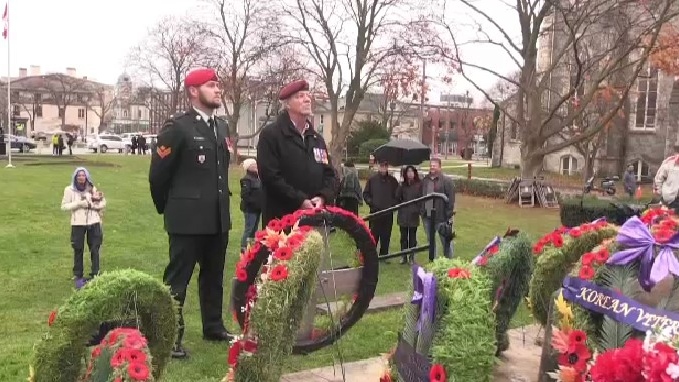 Matthew Young (left) and his father Richard Young (right) at the Galt cenotaph in Cambridge, Ont.

One of them, Matthew Young, joined in 2005. In 2010 he fought in Afghanistan for several months.

“My father asked what was the biggest challenge of my service,” said Richard. “I said putting my son on the bus to go to Afghanistan.”

“I deployed when I was younger… in my early 20s,” said Matthew. “To be quite honest, I didn’t think much of that while serving. But now it starts to hit a little more with children and everything. Thinking about deployment, it does get a little worrisome.”

While both have put their lives on the line, both said fighting for their country is a great honour and its important to carry on traditions.

In Guelph, ceremonies began around 9 a.m. with a march to the Sleeman Centre where a full ceremony was held inside for the first time since 2019.

Branch 234 poppy chair David Thompson said it’s an important opportunity to educate the younger generation about the sacrifices made and the lives lost.

“They are our future. The future of our country, but they also are the future of our legion,” Thompson said. “We want them to become very aware of remembrance, to see it as a chance to take a stand and say that ‘we’re here to support our veterans and remember them.’”

This year marks a number of milestones for the Guelph Legion.

It’s the 90th anniversary of Branch 234’s formation, the local pipe band’s 100th anniversary and 150 years sine the birth of Guelph native Lt. John McCrae, the author of the poem ‘In Flanders Fields.’

In Waterloo, a large parade made its way down Regina Street ending at the cenotaph where a large crowd paid tribute.

The ceremony included music, the laying of wreaths and moments of silence and reflection.

In Elora, handmade symbols of hope brought the community together.

Readmore : Airbnb plans to fix cleaning fees. A look at how that would work

The poppies cascaded down the church bell tower and the sign outside. 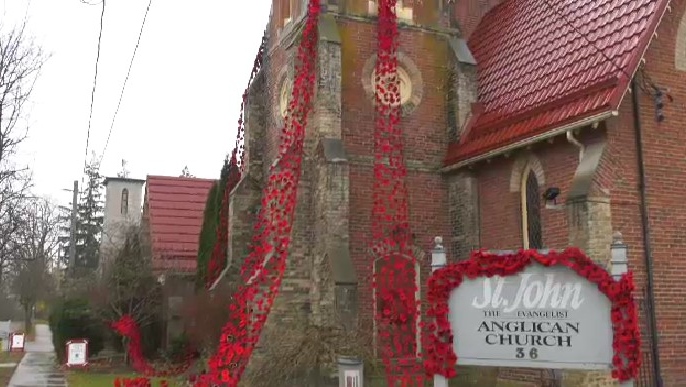 This year’s display also included a few black poppies with gold edging to honour the memory of the late Queen Elizabeth II.

Over 9,000 poppies were received by the church and were distributed to shops, nursing homes and libraries throughout the community.

The installation was also dedicated to Lt. John McCrae, the Guelph poet who wrote “In Flanders Fields.”

In New Hamburg, a parade travelled through the downtown, culminating at the cenotaph on Huron Street where a service was held and wreaths were laid. 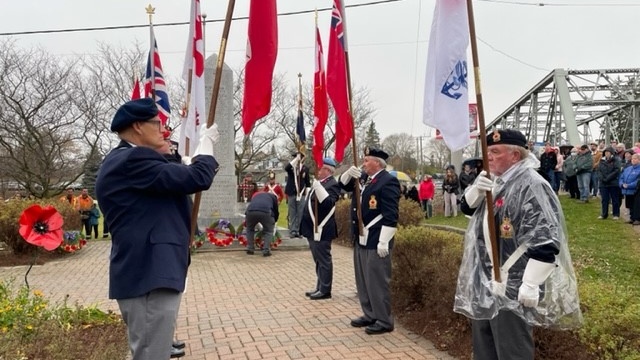 “It means remembering the people who gave us our freedom, that’s what it means for all of us,” said Terry Broda, past president of New Hamburg Legion Branch 532. “You know, we have turmoil going on in all our lives but I think today is really special to sit back and think of your community and respect your community, so that’s what it means to me.”

In addition, a special tribute in Wilmot Township saw banners highlighting veterans and their stories hung throughout the township’s downtown areas.

“With the veterans up on the post, the posters up on the poles – it’s a beautiful scene, it just made it more memorable today for me,” Broda said.

In total, 75 are on display, highlighting and naming veterans, both living and deceased. The photos honour soldiers from across Canada and the United Kingdom.

“I used to go to my father’s and watch it with him every time,” David Perrott said at the ceremony in New Hamburg. “He was too young to serve in the Second World War, but he joined the reserves. Our family has always supported this service, we appreciate the great turnout. I’m happy so many people remembered.”

For Marie Voisin, being a part of the banner program takes on a whole new meaning as her own father’s banner sits right in the centre of the New Hamburg downtown core.

“From the very beginning when people would come with their photos and give them to me and tell me the stories about their fathers or grandfathers, they’d cry, I would cry because it’s such a moving thing. Then once we get the banners hung, seeing the families visiting their loved ones that are there, it makes me very sad but happy too,” said Voisin.

The banners in Wilmot Township will remain up for the month of November, before they are stored away until next year.

It’s hoped more banners honouring veterans will be added each year. Families are invited to purchase one to remember someone in their life, or the legion will cover the cost for those who can’t.