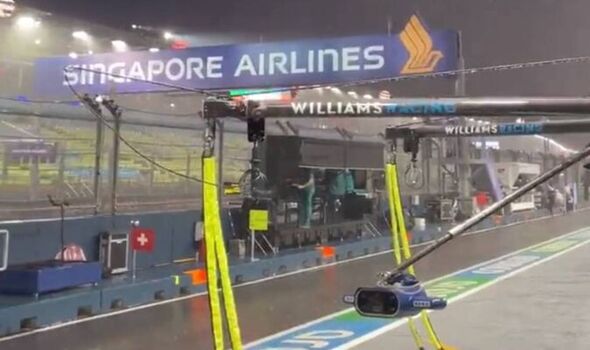 The Singapore Grand Prix has been delayed due to heavy rain (Image: F1)

The start of the Singapore Grand Prix has been delayed due to a torrential downpour on the track with certain sections now flooded. Rain before Sunday’s race had been expected with dark clouds looming over the track just an hour before the cars were set to go out on track.

The race had originally been scheduled to start at 1pm (BST) but that has now been pushed back with the pit land open and start procedure being delayed. Pictures and videos soon start circling social media of just how much the track had flooded in certain areas, including the pit straight.

Some sections of the grandstand where fans were seated were also seen gushing with excess water. With the delay to the start of the race, there could well be a scenario the Singapore Grand Prix doesn’t complete its full 61 laps.

Regulations changed at the start of the 2021 season to reduce the window in which an F1 race can take place from four to three hours. That starts from the scheduled start time, meaning the Singapore Grand Prix will need to be completed by 4pm (BST). 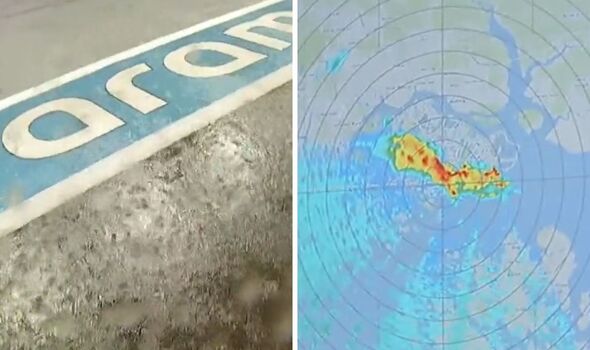 But with the cars still yet to take to the track, a long delay is expected and a full race could be unlikely. At least two full laps must be completed for points be awarded with further possible bands of reduced points available should the race last longer.

F1 teams were spotted making certain tweaks to their cars in the garage, although they’re limited to making major changes with the cars in parc ferme. Sky Sports Ted Kravitz, looking into Mercedes’ garage, explained: “They’re converting the car to a wet set-up as much as they can.

“More work has been done on George Russell’s car, and that’s because he starts in the pit lane.”

Russell suffered a surprise Q2 exit in qualifying on Saturday after suffering a problem with his car.

He was due to start the race in 11th, but he’s decided to take on a new power unit forcing him to start from the pitland.