Thousands showed up to SaskTel Centre for the return of in-person Remembrance Day services Friday morning.

It was the first time services were held at the centre since the COVID-19 pandemic.

The service began at 10 a.m. and was streamed live on CTVNewsSaskatoon.ca. 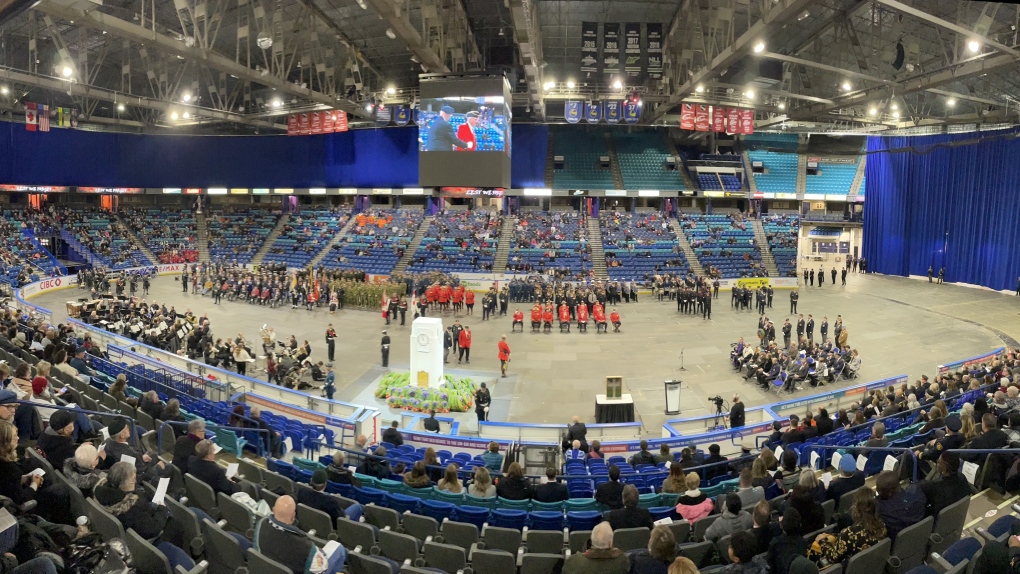 Older veterans and younger soldiers currently serving delivered messages via video to the six-thousand people gathered for the service.

Padre Ivan Nahachewsky began by acknowledging they were on Treaty 6 territory.

The ‘Hymn of Remembrance was led by the Salvation Army Band, followed by a Hebrew scripture reading.

Chimes sounded at 11:03 followed by ‘The Last Post’. Bagpipes were played to break the silence.

‘For the Fallen’, a poem by Laurence Binyon, was read and a member of the Sikh community read the prayer for the country.

A prayer for world peace was offered by a representative of the Saskatchewan First Nations Veterans Association. He offered a prayer to the Creator in Cree.

An Anglican minister offered the next prayer, reflecting on peace.

Official wreaths were laid beginning with Silver Cross mother Judith Budd, the mother of Cpl. Shane Keating who died in Sept. 2006 while on duty in Afghanistan. 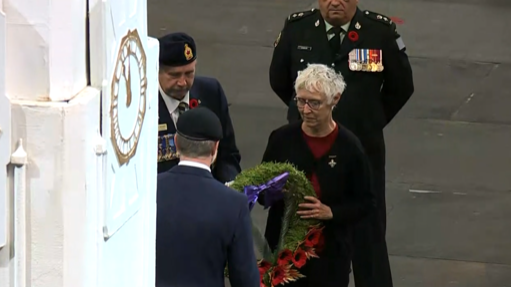 Silver Cross mother Judith Budd, the mother of Cpl. Shane Keating who died in Sept. 2006 while on duty in Afghanistan, laid a wreath at the service. (CTV News)

Readmore : Beyond Meat revenue drops as it cuts prices to boost demand

A wreath was laid for the Government of Canada by MP Cory Tochor while MLA Don Morgan represented the provincial government.

A tribute to the wounded was read, followed by ‘In Flander’s Field’ as the Metis song ‘The Warriors Lament’ was played.

‘O God Our Help in Ages Past’ was played by the Salvation Army Band.

Final remarks and benediction were given at 11:35 a.m.

‘God Save the King’ marked the end of the service.

The service in Saskatoon has been dubbed Canada’s largest indoor Remembrance Day ceremony.

It was the 91st service in Saskatoon.

Free bus service to and from SaskTel Centre was offered from downtown, Market Mall and Centre Mall.