He also revealed his former co-star and last year’s winner Rose Ayling-Ellis has given him advice on getting through the demanding dance contest. 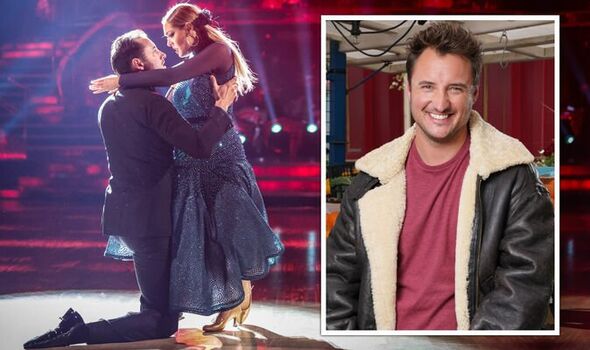 James with Amy last night, and right, in his role as Mar tin Fowler (Image: BBC)

Speaking about his tan, he said: “I’ve just put a line in that I’ve been down to the beach for the weekend. I can’t not have a spray tan, you’re on Strictly, you’ve got to have a spray tan whether you like it or not.”

And he said of Rose: “She has been a ray of sunshine. (She said) ‘take every second in as it goes so quick’.

Readmore : Jay Blades admits ‘big-time problem’ as he addresses project away from The Repair Shop

“She was there every week, she did the full thing and she said even that went so fast.”

Asked if he had taken any technical tips from Rose, James, who is paired with pro dancer Amy Dowden, said: “No, I couldn’t do that. Amy is my coach, isn’t she.”

But the soap star says his wife Victoria, with whom he has three sons – Edward, Louis and Hugo – gives him plenty of encouragement.

“She says ‘Go and give it everything you’ve got’,” said James.

Readmore : GMB’s Noel Phillips ‘shaken’ after he was ‘mugged and racially assaulted’ by thief

Last night James and Amy scored 24 for their tango to Bad Habits by Ed Sheeran.

Motsi Mabuse said the dance gave her “the biggest goose bumps ever”.