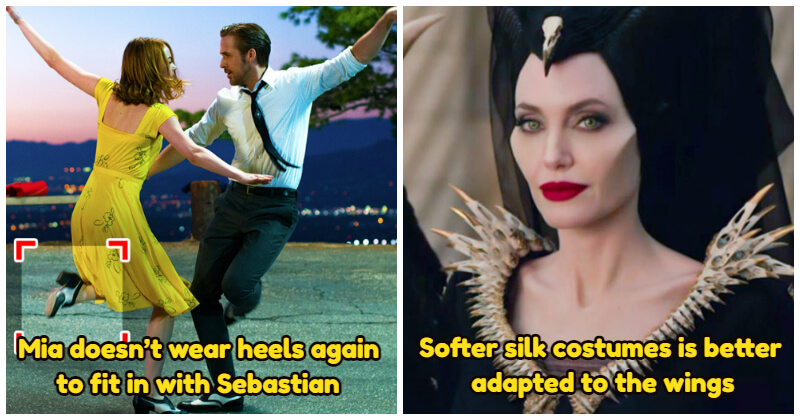 We often forget how much effort is put into making movies. For example, when shooting Joker, we can hardly imagine how challenging it is to create the ideal lighting scheme to make Joaquin Phoenix look more gaunt. For a film to be considered a true work of art, everything you see on screen must have a reason to be there. A movie’s wardrobe is no exception, and occasionally the outfits have far more meaning than you might realize.

You are reading: 12 Times Costume Designers Left Hints For Viewers in Popular Films

The costume of a movie or series that we are talking about goes far beyond outfits that are assessed as just beautiful. These costumes can either be an important factor in the plot or a complement to a story or a character due to their colors, details, or style.

Today, we’ll look at 12 films in which the selected outfit gave clues or important details. Scroll down to see what they are and tell us which movie’s costumes impressed you the most.

The worlds that director Tim Burton creates are known for having a lot of personalities. He tried to use the costumes in Alice in Wonderland to show how the main character’s personality changed throughout the journey, beginning with a bright blue dress reminiscent of the cartoon version and changing to outfits more in line with the director’s style.

#2 Aragorn and Boromir’s bracers in the LOTR Trilogy

One of the most significant characters in Peter Jackson’s outstanding adaptation of J. R. R. Tolkien’s works is Aragorn. The character’s costume was considered carefully by actor Viggo Mortensen, who used the garments even in his free time to better adjust them to his mobility. This helped him elevate his performance.

Additionally, a notable detail from the second movie is that he wears Boromir’s armbands to honor his memory during the remaining part of the journey. Boromir was his fallen companion in the first movie.

#3 Chris Evans’ sweater in Knives Out Source: © Knives Out / Lionsgate and co-producers

Sometimes even the smallest wardrobe details can add up to technocratisation. In the movie Knives Out, Chris Evans’ character’s seemingly unimportant sweater hole effectively conveys his contempt and indifference. Maleficent, the iconic villain from Sleeping Beauty, received a lot of charm and personality from Angelina Jolie. The outfits, which in the sequel had to change from rich fabrics to lighter silk that better matched the wings of the iconic character are one of the most noticeable differences between the first and second movies. Source: © Birds of Prey: And the Fantabulous Emancipation of One Harley Quinn / Clubhouse Pictures (II) and co-producers

In the Harley Quinn movie, Ewan McGregor played a flamboyant antagonist with such an arrogant personality that almost all of his personal belongings were customized in their own way. With his pajamas, this was taken a step further because his face is clearly seen in the cloth pattern.

#6 Hidden details in the Ant-Man and The Wasp costumes At first glance, Ant-Man and The Wasp’s clothes appear to be typical superhero costumes. However, if we check the chests of both suits more closely, we will see a face with a wasp-like countenance on The Wasp’s outfit and a silhouette like an ant’s head on the Ant-Man suit. The roadside dance between Ryan Gosling and Emma Stone’s characters is one of La La Land’s most iconic scenes. In that scene, Stone’s character takes off her heels and changes to tap shoes, which is a small but important detail.

The character doesn’t wear heels again until the end of their relationship, which at first glance may not appear to convey much, but actually represents the huge effort she made to fit in with him. Source: © Once Upon a Time…in Hollywood / Columbia Pictures and co-producers

Quentin Tarantino’s tribute to the cinema he grew up in the late 1960s and early 1970s with Once Upon a Time in Hollywood proved to be a triumph. The costume designs for the characters were meticulously thought out by the filmmaker and his costume designer, Arianne Phillips.

Readmore : 15+ Confusing Pics Of Celebrities In The Opposite Gender, Guess Who?

For example, Cliff Booth (Brad Pitt), Leonardo DiCaprio’s stunt double, wears dainty loafers to show that he is a tough person while Rick Dalton (Leonardo DiCaprio) wears cowboy boots to symbolize how he attempts to feel like a tough guy with his film or television roles.

#9 The attire of the employees in The Grand Budapest Hotel Set and costume design are important to Wes Anderson. His regular costume designer, Milena Canonero, was inspired by the sketches of Italian tailor Umberto Tirelli to design the outfits of the hotel staff for The Grand Budapest Hotel.

Tony Revolori’s portrayal of Zero Moustafa clearly identifies him as Monsieur Gustave’s (Ralph Fiennes) apprentice thanks to his short-jacket attire and Lobby Boy cap, whereas Fiennes’ character-appropriate costume is both classically elegant and eccentric.

#10 The colors of the dresses in Anna Karenina The 2012 Anna Karenina adaption succeeded in combining the clothing of 1870s Imperial Russia with 1950s style. It also made use of color details to distinguish between its characters, highlighting Kitty Alexandrovna’s innocence with traditional white and Anna Karenina’s rebellious nature with darker clothing.

#11 The costumes of the Bene Gesserit in Dune The mystery surrounding the Bene Gesserit figures, who are dressed in dark robes and veils that surely give them a very melancholy yet compelling touch, is one of the most interesting aspects of Dune.

Their costumes, which are in keeping with the artifacts and their ability to forecast the future, are inspired by Tarot cards, the queen in the game of chess, and medieval nuns, according to costume designer Jacqueline West. It is true that Harrison Ford’s outfit in Indiana Jones and the Temple of Doom is a tribute to the one worn by Sean Connery’s James Bond in Goldfinger. In this way, one of the most famous action heroes in Western cinema paid respect to another.

Connery portrayed the father of the character played by Ford in Indiana Jones and the Last Crusade, thus Indiana and Connery would later appear together on screen.