In a letter sent to his counterpart Kim Jong un on Pyongyang’s liberation day, the Russian President claimed that the move to strengthen the connection between the two would be in both countries’ interests.  In turn, Mr Kim said the friendship between the two nations had been forged in World War II with victory over Japan.

He added that their “comradely friendship” would grow stronger.

You are reading: Vladimir Putin warns of closer Russian ties with North Korea

But the announcement will be regarded in the West as a further effort by the two pariah states to build alliances.

Russia’s allies remain few and far between, though the ambiguous approach by China to the invasion of Ukraine continues to be a major boost to Moscow.

And now the strengthening of ties with another nuclear state in North Korea is seen as a worrying development for the West.

According to a report by North Korean state media outlet KCNA, Mr Putin said the expanded bilateral relations would “conform with the interests of the two countries”.

In his letter back, Mr Kim said the Russia-North Korea friendship “forged in the anti-Japanese war” had been “consolidated and developed century after century”.

And the North Korean leader added that “strategic and tactical cooperation, support and solidarity” between the two countries “had been put on a new high stage, in the common front for frustrating the hostile forces’ military threat and provocation”.

Pyongyang did not identify the hostile forces by name, but the term has been used repeatedly by North Korea to refer to the US and its allies.

Dictator Kim has continued to back Russia since the invasion began, blaming the West’s ‘abuse of power’ for the conflict.

“The root cause of the Ukraine crisis totally lies in the hegemonic policy of the U.S. and the West, which enforce themselves in high-handedness and abuse of power against other countries,” the North’s official KCNA news agency said, citing an unnamed foreign ministry spokesman. 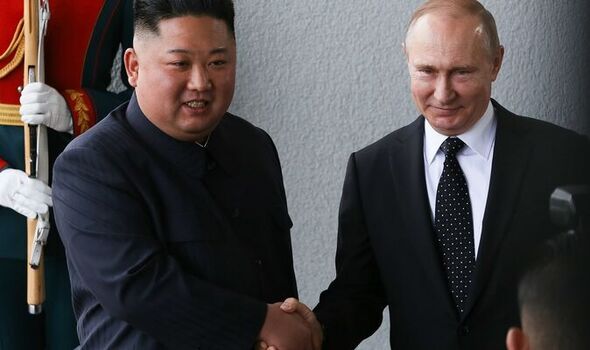 The former Soviet Union was once a major ally of North Korea (Image: Getty)

The former Soviet Union was once a major ally of North Korea, offering economic co-operation, cultural exchanges and aid.

But the relationship suffered since the collapse of the Iron Curtain, only gradually picking up somewhat after Russia’s gradual estrangement from the West since the early 2000s.

In July, North Korea was one of the few countries to officially recognise two Russian-backed separatist states in eastern Ukraine, after Russia signed a decree declaring them as independent.

In retaliation, Ukraine, which is fighting off a Russian invasion of its territory, cut off all diplomatic ties with Pyongyang.

Despite Putin’s illegal invasion breaking international law, a handful of countries still support him – or at the very least, refuse to condemn him.

The closest of these is Belarus, which has repeatedly and publicly backed his action in Ukraine. The former Soviet nations have important economic and political ties, with Russia accounting for 48 per cent of Belarus’ external trade.

The two nations also share similarly-minded strongmen at the helm, with Alexander Lukashenko enjoying the role of Putin’s war-mongering sidekick.

Others to have taken an ambiguous response to Putin’s invasion include Pakistan, Venezeula, Syria, India and Serbia.

But by far the biggest concern is over China’s response – which has not condemned the invasion.

Beijing held talks with Putin both before and after the invasion and abstained in UN vote against the war, but does claim it wants to broker peace.